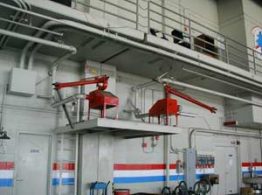 Marine Corps Air Station (MCAS) Miramar, located just north of San Diego, California, is home to several squadrons of aircraft. Protection of these most valuable aircraft in the event of a fire in one of the aircraft hangers is of paramount importance to the Department of the Navy. When a pipeline inside one of the hangers ruptured and almost damaged an aircraft during routine testing of the Flight Line Fire Protection System (FPS), waterhammer was suspected to be the cause and the installation of a surge protection system was ordered.Flow Science played a major role in the design of the surge protection system for the MCAS Miramar FPS, performing a facility inspection, transient flow analysis and development of surge protection options for the FPS.Foam canons (see Figure 1) installed at each aircraft bay spray a combination of fire retardant foam and water over an aircraft when one or more ultraviolet/infrared sensors detects a fire in an aircraft bay.Flow to each canon is controlled by a deluge valve that opens fully to supply as much fluid as possible for the protection of the aircraft. The automatic opening of the deluge valves followed by the manual closing of the nearby isolation gate valves create significant low and high pressure surges, respectively, that propagate out from the valves and into the 16-inch diameter pipeline that runs the length of the military base. Computer simulation of the operation of the FPS by Flow Science disclosed that the surge pressures created by the closure of the gate valves could greatly exceed the maximum allowable pressure of the FPS piping.

A detailed pressure surge analysis of the FPS identified the need to install several small, pressurized bladder surge tanks at each hanger and two much larger air compressor assisted pressurized surge tanks along the 16-inch diameter pipeline. The surge protection system has been installed and will soon be tested.